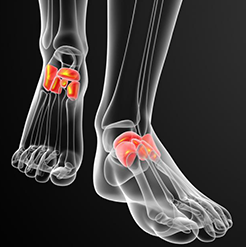 The ankle joint is formed by the bones of the lower leg and the talus of the foot and allows for the up-and-down movement of the foot.  The talus is a triangular-shaped bone that fits snugly into the mortise formed by the tibia and fibula (bones of the lower leg).  The bony prominence on the inside of the ankle is called the medial malleolus and comes off the end of the tibia, and the one on the outside of the ankle is called the lateral malleolus and is part of the fibula.  Multiple ligaments connect these bony prominences to other bones in the foot and help provide stability for the ankle.  These ligaments, along with the muscles and tendons of the lower leg, work together to handle the stress the ankle endures during weightbearing activities.

The foot contains 28 bones and more than 100 muscles, ligaments, and tendons to perform two important functions: weightbearing and propulsion.  It can be divided into three sections: the forefoot, midfoot, and hindfoot. The forefoot is the front part of the foot and consists of the phalanges (14 bones in the toes) and 5 metatarsal bones.  The midfoot Is made up of 5 irregularly shaped bones called the tarsals.  They form the arches of the foot, which are very important for weightbearing.  There are two large bones in the hindfoot called the talus and calcaneus.  The calcaneus forms the heel of the foot and the talus rests on top of it to form the pivoting joint of the ankle.

The muscles that control the movements of the foot originate in the lower leg.  These muscles and the tendons that attach them to bones in the foot, along with ligaments, provide stability for the foot, strength for walking, and assist with balance.

The conditions that we treat involving the foot and ankle include, but are not limited to: