We are OPEN and committed to our patients and their safety. Click here to learn more. 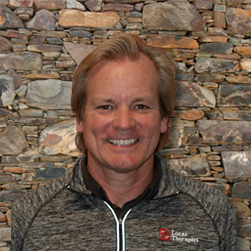 As a serial entrepreneur, Mark Lucas has diverse business experience in healthcare, technology, food services and retail and has experience raising venture and private equity capital.

With his wife Wendy Lucas, PT, they co-founded physical & occupational therapy practice, Lucas Therapies in 1992.  The company has clinics throughout the region with a large diversity of services and a mobile division that can service clients within a 250-mile radius of the Roanoke Valley.  They also developed ‘Virtual Sally’, a virtual receptionist used in all clinics to create efficiencies within the front desk patient experience.

In 1998, he co-founded ProVox Technologies, pioneers in the voice recognition technology space. ProVox achieved rapid growth nationally and Won Microsoft’s Product of the Year Award in the Emerging Technologies sector in 2000.  Company sold to Atirix Medical Systems in 2008.

In 2004, Mark and two partners became the first franchisee of Five Guys Burgers & Fries.  They built out a 25-unit territory in VA and NC with over 600 employees before selling company in 2010.

He then tried his hands at politics narrowly losing in a bid for Roanoke City Mayor in 2012.

Started Firefighter Dumpsters with two firefighters from Texas in 2017.  Building a nationwide franchise organization employing firefighters and giving a portion of proceeds back to support local volunteer fire departments.

Currently, Mark is consulting with other entrepreneurial companies and working on two medical technology products.  The first, called Foot Frog could dramatically improve patient compliance when a limited weight bearing protocol is prescribed to significantly improve healing.  The second product could significantly reduce the occurrence of ACL injuries using an interactive feedback algorithm in training and rehab.

Mark is a graduate of Virginia Tech and through YPO, completed a post graduate curriculum at the Harvard Business School.  He has been married to Wendy Lucas for 31 years. They have two daughters, Claiborne and Caleigh.