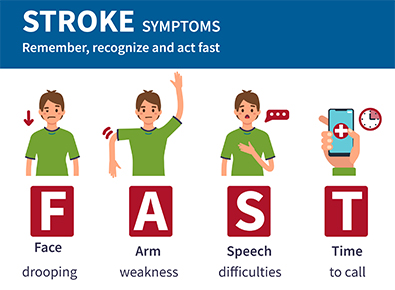 Stroke is a disease that affects the arteries leading to and within the brain. It is the No. 5 cause of death and a leading cause of disability in the United States.

A stroke occurs when a blood vessel that carries oxygen and nutrients to the brain is either blocked by a clot or bursts (or ruptures). When that happens, part of the brain cannot get the blood (and oxygen) it needs, so it and brain cells die.

Just as strokes have many effects, they also have many causes. Here are the various types of stroke.

Ischemic stroke occurs when a vessel supplying blood to the brain is obstructed. It accounts for about 87 percent of all strokes.

Fatty deposits lining the vessel walls, called atherosclerosis, are the main cause for ischemic stroke. Fatty deposits can cause two types of obstruction:

Silent cerebral infarction (SCI), or “silent stroke,” is a brain injury likely caused by a blood clot that interrupts blood flow in the brain. It’s a risk factor for future strokes and a sign of progressive brain damage.

You could have a stroke and not know it. It’s called silent cerebral infarction (SCI), or “silent stroke.”

Silent stroke is likely caused by a blood clot that interrupts blood flow in the brain. It’s a risk factor for future strokes and a sign of progressive brain damage.

Other conditions are related to SCI:

What is Hemorrhagic Stroke?

The two types of hemorrhagic strokes are intracerebral (within the brain) hemorrhage or subarachnoid hemorrhage.

What is a TIA?

A Transient Ischemic Attack (TIA) is often called a mini-stroke, but it’s really a major warning.

TIA is a temporary blockage of blood flow to the brain. Since it doesn’t cause permanent damage, it’s often ignored. But this is a big mistake. TIAs may signal a full-blown stroke ahead.

When you first notice symptoms, get help immediately. View a detailed illustration of a TIA.

A Transient Ischemic Attack [TIA] is often called a mini-stroke, but it’s really a major warning. TIA is a temporary blockage of blood flow to the brain. Since it doesn’t cause permanent damage, it’s often ignored. But this is a big mistake. TIAs may signal a full-blown stroke ahead. When you first notice symptoms, get help immediately.

Do TIA’s Cause Lasting Damage?

Even though they can be troubling, TIAs do not appear to cause lasting damage. Why? A TIA occurs because of a blockage to the brain. But the body fights back quickly by pushing the TIA “downstream” or by using natural clot-dissolvers — anticoagulants — in the blood. The blockage isn’t in place long enough to do any lasting damage. Without blood flow, brain tissue can be injured. The severity of any blockage-related stroke is determined by the location of the injury in the brain and how long the tissue is without blood.

TIA as a Warning for Future Stroke

TIAs are often called “mini-strokes,” because their immediate consequences are harmless. But “warning stroke” is a better label, because a TIA usually foreshadows a full-blown stroke. TIAs are caused by a clot or blockage in the brain. The blockage is short term. The clot usually dissolves on its own or gets dislodged, and symptoms usually last less than five minutes.

The statistics tell part of the story:

Anyone can have a TIA  but the risk increases with age. If you’ve previously had a stroke, pay careful attention to the signs of TIA, because they could signal a second stroke in your future.

The risk factors are smoking, cardiovascular disease, diabetes and blood clots called embolisms. Get help immediately if you think you could be having a TIA. Trained medical staff will need to evaluate your condition. Some causes are only visible with hospital equipment. When a TIA occurs in a young person with no clear risk factors, the patient might be sent to a neurologist for testing to rule out vasculitis, carotid artery dissection and other types of injury or infection.

If you’re worried that you’re having a transient ischemic attack or TIA, get medical help right away. If you think you might’ve had one in the past, do your homework and talk with your doctor. TIAs are often followed by more severe strokes.

A TIA occurs before about 15 percent of all strokes.

Why is a TIA an Emergency?

If you think you’re having a transient ischemic attack, also called a TIA or a mini-stroke, your symptoms may resolve quickly. But it is not safe to assume you don’t need urgent medical care. In fact, you should call 911 right away.

Cryptogenic Stroke or Stroke of “Unknown Cause”

In most cases, a stroke is caused by a blood clot that blocks blood flow to the brain. But in some instances, despite testing, the cause can’t be determined. Strokes without a known cause are called “cryptogenic.”

That’s why it’s important to dig deeper for a definitive diagnosis. Collaboration by neurologists, cardiologists, electrophysiologists and others may reveal the answers needed to provide targeted treatment for preventing recurrent strokes.

Brain stem strokes can have complex symptoms, and they can be difficult to diagnose. A person may have vertigo, dizziness and severe imbalance without the hallmark of most strokes — weakness on one side of the body. The symptoms of vertigo dizziness or imbalance usually occur together; dizziness alone is not a sign of stroke. A brain stem stroke can also cause double vision, slurred speech and decreased level of consciousness.

Only a half-inch in diameter, the brain stem controls all basic activities of the central nervous system: consciousness, blood pressure and breathing. All motor control for the body flows through it. Brain stem strokes can impair any or all of these functions. More severe brain stem strokes can cause locked-in syndrome, a condition in which survivors can move only their eyes.

If a stroke in the brain stem results from a clot, the faster blood flow can be restored, the better the chances for recovery. Patients should receive treatment as soon as possible for the best recovery.

Like all strokes, brain stem strokes produce a wide spectrum of deficits and recovery. Whether a survivor has minor or severe deficits depends on the location of the stroke within the brain stem, the extent of injury and how quickly treatment is provided.

Risk factors for brain stem stroke are the same as for strokes in other areas of the brain: high blood pressure, diabetes, heart disease, atrial fibrillation and smoking. Similarly, brain stem strokes can be caused by a clot or a hemorrhage. There are also rare causes, like injury to an artery due to sudden head or neck movements.

Recovery is possible. Because brain stem strokes do not usually affect language ability, the patient is often able to participate more fully in rehabilitation therapy. Double vision and vertigo usually resolve after several weeks of recovery in mild to moderate brain stem strokes.

Warning Signs for ALL types of Strokes

The warning signs for a stroke are the following:

Educate yourself on the warning signs of stroke — and do it F.A.S.T.

Stroke can change your life in an instant. But quality rehabilitation can help you recover.

It’s important to make informed decisions about rehab quickly, which can be overwhelming. Our guide will help you get started. It includes information you and your family need to plan your rehabilitation journey.

The best results can only be achieved through the combined efforts of your family, your team of healthcare professionals and, of course, you.

Rehabilitation is a key part of stroke recovery. Though it doesn’t reverse the effects of a stroke, it builds your strength, capability and confidence to help you return to independent living.

What is a rehabilitation program?

Under your doctor’s direction, rehabilitation specialists provide a treatment program suited to your needs. Physicians who specialize in rehabilitation are called physiatrists.

What will I do in rehabilitation?

It depends on what you need. You may improve your independence in many areas:

When does rehabilitation begin?

Your doctor determines when you’re medically stable and able to benefit from rehab. Most rehabilitation services require a doctor’s order.

Where do I get rehabilitation?

You may be involved in rehabilitation in some or all of these settings. It depends on your needs and what type of rehabilitation program is best for you.